Pleurotus ostreatus , its vernacular name in French,  Oyster  (the form of)  mushrooms  is a  fungus  basidiomycete  of the genus  Pleurotus  of the  family  of  Pleurotaceae . This forest species has been the subject of an industrial culturesince the  1970s . it is usually the one found on stalls under the name of oyster mushrooms.

Oyster mushrooms grow from autumn to winter depending on the region, in clumps on living or fallen hardwoods. It is a  parasite  of injury but it is also  saprophyte .

It is an honorable edible, if one is not put off by the flaccidity of its flesh. Unlike  porcini mushrooms  or  chanterelles , it is not really enough for itself to be pan-fried, it will largely benefit from being cooked in a more elaborate way, in mixture or accompaniment.

The crop seems to have started in  Hungary  and has now spread to  Europe ,  America  and  Asia , without however overly competing with the  Paris mushroom . It is rather sold as  wild mushrooms

Initially practiced on seeded and buried logs, it is now carried out on a sterile substrate of plant wastes maintained at the appropriate temperature and humidity, which allows more abundant production in a very short time.

Another species of  oyster mushroom  is cultivated: it is the  panicose roach .

Nearby species and likelihood of confusion

The closest species is the  pleurot cornucopia ,  Pleurotus cornucopiae , earlier (May to July) and having decurrent blades to the base of the foot where they form deep cells.

Pleurotus pulmonaris , which is lighter, whitish and yellowing, with non-deciduous cream-colored cells, may also be mentioned  .

The possible confusion is safe, as these species are also edible.

A   dimeric lectin was isolated from the   fresh edible sporophores of the fungus  Pleurotus ostreatus . Lectin exerted potent antitumor activity in mice bearing   S-180 sarcoma and  H-22 hepatoma . The survival of these mice was prolonged and the increase in body weight reduced after lectin treatment 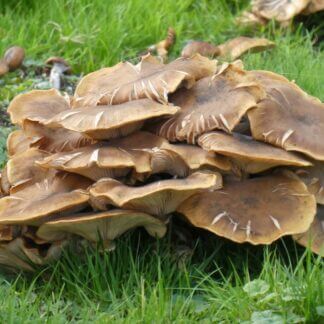