It has in addition to a sweet and pleasant fragrance, remarkable nutritional properties, with a richness in different  vitamins B ,  vitamin D ,  iron ,  potassium .

Lentinula edodes , called  oak lentin  (common name in  French ), but also known as  shiitake , (Japanese  shiitake  (椎 茸? )),  Scented mushroom , ( Chinese  : 香菇  ;  pinyin  :  xiānggū ), or  pyogo  ( of Korean  표고 ), is an edible mushroom growing in the  Far East  on the wood of various  hardwoods , and which takes its Japanese name from the tree  shii  (椎? , Castanopsis cuspidata , synonyms:  Pasania c. ,  Shiia sieboldi ) who is his historical host. The latter is a majestic tree with very small leaves, of the family Fagaceae .

It has in addition to a sweet and pleasant fragrance, remarkable nutritional properties, with a richness in different  vitamins B ,  vitamin D ,  iron ,  potassium , in the traditional Chinese medicine, it is considered as a neutral and orexigenic element   (stimulating l ‘ appetite ) in case of anorexia . Chinese vegetarians call her the ”  Empress of Plants  ” ( Chinese  :  植物 皇后  ;  pinyin  :  zhíwù huánghòu ).

Because of all these properties, it is a recurring element of different Chinese, Korean and Japanese cuisines.

In Japan, the oldest mention of shiitake dates from the year  378 . In the  language of Yamato , the word  take  ( 竹 ,  タ ケ? ) Denoted a  kami , plant divinized by the animist religion, symbol of vitality and spectacular growth, able to grow “like a  bamboo  ” or “like a mushroom”.

In Korea, where it is called  shiitake  ( Hangul  :  표고 ), we already found the  xvii th  century  in the recipe  Japchae  of  Yi Chung  (in) , become  HoJo panseo  (Treasury Secretary) with this dish. Contemporary culture of the oaks’ lentin.

It has been cultivated in China, Korea and Japan for a long time, probably  1,000 years  in China ( see historical section ). Traditionally grown on dead branches of  deciduous trees pierced with holes in which one introduces mycelium (mushroom white) or on logs of wood, and nowadays most often in  mushroom  farm on cushions of compost with consistency of cork, pre-seeded . They are immersed in cold water to accelerate fruiting. It is the most cultivated mushroom (fresh or dried) in  Asia .

It is now sold fresh in markets of Europe  and even grown in  France , where his Japanese spelling was sometimes Frenchified in shitake. It is also found dried in Chinese grocery stores, so let them soak for about an hour in water and then drain to cook.

This mushroom species also has the peculiarity of having a very fragile mycelium, so a shake is enough to cut the microfilaments of mycelium and thus to reboot the mushroom 1 . 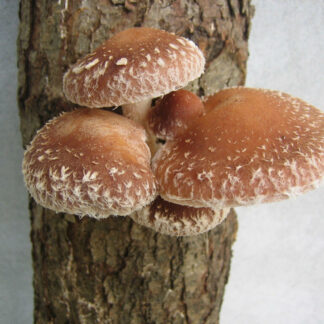