The  lingzhi mushroom  ( Ganoderma lucidum ) is a  fungus  basidiomycete  of the  family  of  Polyporaceae . Also called  Reishi  in Japan, it grows on the ground and has a stipe and a sporophore, unlike most  polypores .

We present it in its most used form in powder form

The hat, which measures 4 to 20 cm, has a varnished wood appearance. It is yellow in color then reddish brown. It is rounded or kidney-shaped, furrowed and zoned concentrically and slightly wrinkled radially (like wood). A horny cuticle shining like lacquer covers it. The  margin  is clearer and then darker. The tubes and pores are thin, yellowish and brown, often covered with  bloom  white. The generally lateral foot has a length varying between 4 and 20 cm, is gnarled, black-brown and shiny. The thin, fibrous flesh has a beige-brown hue and gives off a weak odor. Although tough, the fungus disappears in winter. On the other hand, it can be desiccated and stored for many years.

The shiny ganoderm comes from June to November in Europe, on the ground nearby and on the buried roots of hardwoods (including fruit trees). Without being rare, it grows alone or in very small groups. Coriace and bitter, it is difficult to use for gastronomy.

Dried and / or powdered and presented under various conditions. In contrast, it has been used in traditional Chinese and Japanese medicine for over two millennia as a tonic or immune stimulant.

We especially lends properties  anticancer  which were partly confirmed by scientific studies 2 . Its efficacy against the activity  of the human immunodeficiency virus (HIV) has also been shown by some studies 3 , 4 , but not in human subjects. As a result, mushroom cultivation was started in the  Far East .

Several compounds present in  Ganoderma lucidum  have been isolated. Among those which are associated anti-HIV activity, we find the  ganodériol  F, the  ganodermanontriol , and  terpenes such as  ganodermanondiol  and ganolucidique acid 3 , 4 . 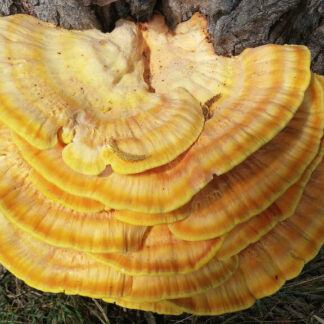