The Chaga (Inonotus Obliquus), has been considered since time immemorial as a food with extraordinary virtues, the Siberians call it the mushroom of immortality. It is rich in essential nutrients. We present it in powder form. You can sprinkle your dishes, drink it in decoction (1 tablespoon, 15 minutes in boiling water), or in infusion (several hours)

The sterile hymenophore is irregularly shaped and has the appearance of burnt charcoal. It is not the mushroom sporophore , but a large mass of mycelium , mostly blackened because of the presence of a massive amount of melanin . Fertile sporophores can only very rarely be found in the form of a brown resupinated fruit-bearing on or near the crystallized mycelium and usually appearing after the death of the tree.

Inonotus obliquus grows in the birch forests of Russia, Korea, eastern North Europe, and in the Auvergne and northern parts of the United States, in the mountains of North Carolina and Canada .

Chaga is considered a medicinal mushroom that has its place in folk medicine in Russia and Eastern Europe. It seems that he concentrates betulin and betulinic acid . It would also have anti-inflammatory properties1. Several studies have shown that Chaga helps fight cancer and detoxify the body of radioactive material emitted during chemotherapy. It would strengthen the immune system in addition to preventing asthma and allergies. It would also be a regenerator of the liver and digestive system2.

Because of the hypoglycaemic activity of polysaccharides, caution should be exercised for those who are prone to hypoglycemia 3. 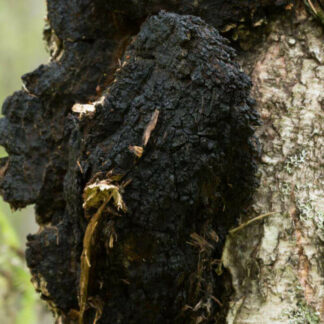