The rose hips, the Rosehip (Rosa Canina) mostly use is cooked in jams  house and craft (jam or rosehips rosehip jam in  Alsace ), jellies, marmalade and ketchup, syrups and liquors, only or mixed with various other fruits.

The  rose hips  or  rose hips  are,  botanically , the  false-fruit  from the transformation of the  floral receptacle  of  rose  and rose hips , and more generally  plants  of the genus  Rosa , family  Rosaceae . The  actual fruits of the rose bushes are actually the  achenes  located inside.

Rosehips of a  rose hips .

The rose hips are vulgarly called “scratches” because they provide  hair to scratch .

The term comes from the  Greek ,  kunorhodon , which means “dog rose”. This name comes from the properties attributed to the  root  of the wild rose  ( “dog rose”, the flower (wild rose) is also called canine rose,  dog rose  in English ) to fight against the  rage . The rose hip is an elongated fleshy fruit ovoid, more or less globular depending on the species and varieties, 15 to  25 mm  long, orange-red at maturity. It forms a kind of urn, open at the top, which bears the dried out remains of  stamens  and  sepals . It contains inside twenty to thirty real fruits which are  achenes  resulting from the transformation of  carpels , each containing a single  seed . These achenes, prolonged by the rest of the  styles  and  stigmas , are provided with numerous   sterile hairs .

The rose hips mature in the fall, around October-November in the northern hemisphere, but can be seen all winter in the  hedgerows  .

Rose hips contain hairs that must be carefully removed because they are very irritating to the  skin  and  mucous membranes  and can be used as  hair to scratch 2 . When ripe, the fruits are edible, fairly  astringent  and  acidic , and especially the presence of irritating hair can cause  itching  in the anus . However, they are rich in  vitamin C  (20 times more than citrus fruits), but also in vitamins  B  and  PP ,  provitamin A  and mineral salts, and contain sugars:  sucrose  and levulose . The fruit of the rose  hip is used especially cooked in  homemade jams and homemade (jam rosehips or wild rose jam in  Alsace ), jelly, marmalade and ketchup, syrups and liqueurs, alone or mixed with various other fruits.

Fresh, softened by the frosts, after a light cooking rosehips form a dough that is eaten sweet with dairy products, providing the body with an important nutrient intake in a rapidly assimilable form, and slightly diuretic.

The very smooth rose hips, pressed with 3 or 4 fingers, nibble: the pulp leaves while the hairs and seeds remain in the skin and can be used to make  decoctions  (boiled less than five minutes).

Dried and reduced to powder, they serve as a  decoction  for herbal teas. You can also make beer, wine.

In  Sweden , rose hips are the basis of  nyponsoppa , literally  rose hip soup , which is a dessert often served with milk and cream or vanilla ice cream.

Many Amerindian peoples   consumed Rose Hips as an excellent survival food because they remain attached to the plant all winter long. Some people made a  decoction  or a beer.

The  Blackfeet  consumed them with  pemmican  (dried meat + fat).

The  Eskimos  of Alaska made it a kind of pudding (crushed pulp with seal oil, water and sugar) or added the berries to a dish consisting of pre-chewed and dried salmon tails.

The  Tanainas  made it a sort of ice cream (mixed with grease or yellow fish eggs).

In  Armenia , we drink the juice of the rose hips.

In popular medicine, rose hips are used especially against  diarrhea , vitamin deficiency  and asthenia . They are used either as a  decoction or in the form of wine or elixir  –  maceration  in alcohol with the addition of sugar.

The  herbalists  use hair from rosehips, administered fasting coated in honey, to eliminate  roundworm . 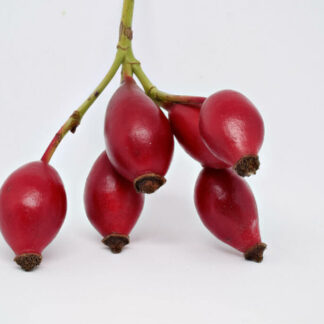