The blueberries (Vaccinium Myrtillus) can be eaten fresh or used in pastry  for making pies and various other cakes. The  blueberry pie  is a dessert traditional season in the mountainous regions of Europe ( Alsace ,  Massif Central ,  Savoie ,  Vosges ,  Ardennes massif , …).

The  blueberries  are  fruits  produced by various species of the genus  Vaccinium  (family  Ericaceae ). These are small blue-purplish berries with a sweet and slightly sweet flavor.

Blueberries grow on the blueberry.

In the botanical sense, blueberries belong to the group of  cranberries , a term used then for all species of the genus  Vaccinium .

In the culinary sense, we distinguish blueberries (blue and rather sweet) and lingonberries (red and rather tart).

Blueberries have different vernacular names in different regions: brimbella, blueberry, etc., but in Canada the term blueberries is generally used   for the fruits of  Vaccinium angustifolium  and  Vaccinium myrtilloides , exclusively American wild species and for those of  Vaccinium corymbosum.  cultivated. sition of the American blueberry (cultivated,  blueberry )

A remarkable property of blueberry juice is its ability to restore the memory of aged rats: demonstrated by JAJoseph in Boston, this effect has since been confirmed by other teams. It is still unclear if this benefit for memory is reproducible in humans 5 . Researchers are studying therapeutic solutions in other areas ( cancer prevention  or degenerative diseases).

The picking of blueberries is regulated in France, especially in nature reserves. The regulations, which vary from one place to another, also change from one year to the next. Thus, in the  Regional Natural Park of Ballons des Vosges , the picking is authorized from July 15 to December 15 for family consumption (2 kg per day per person). The use of the  comb  is tolerated in the part of the reserve located on the departments of Territoire de Belfort, Vosges. It is forbidden in Haute-Saône. In the Hautes-Vosges, this comb is commonly called riffle 7 , just as the blueberry is commonly called “brimbelle” (which grows on the “brimbellier”).

The berries can be eaten fresh or used in  baking  to make pies and various other cakes. The  blueberry pie  is a dessert traditional season in the mountainous regions of Europe ( Alsace ,  Massif Central ,  Savoie ,  Vosges ,  Ardennes massif , …). The   blueberry muffin is a classic American pastry. 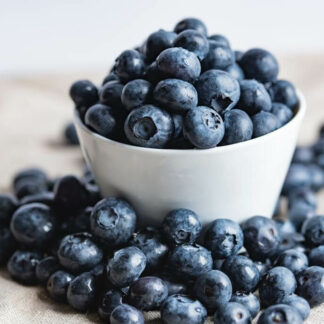